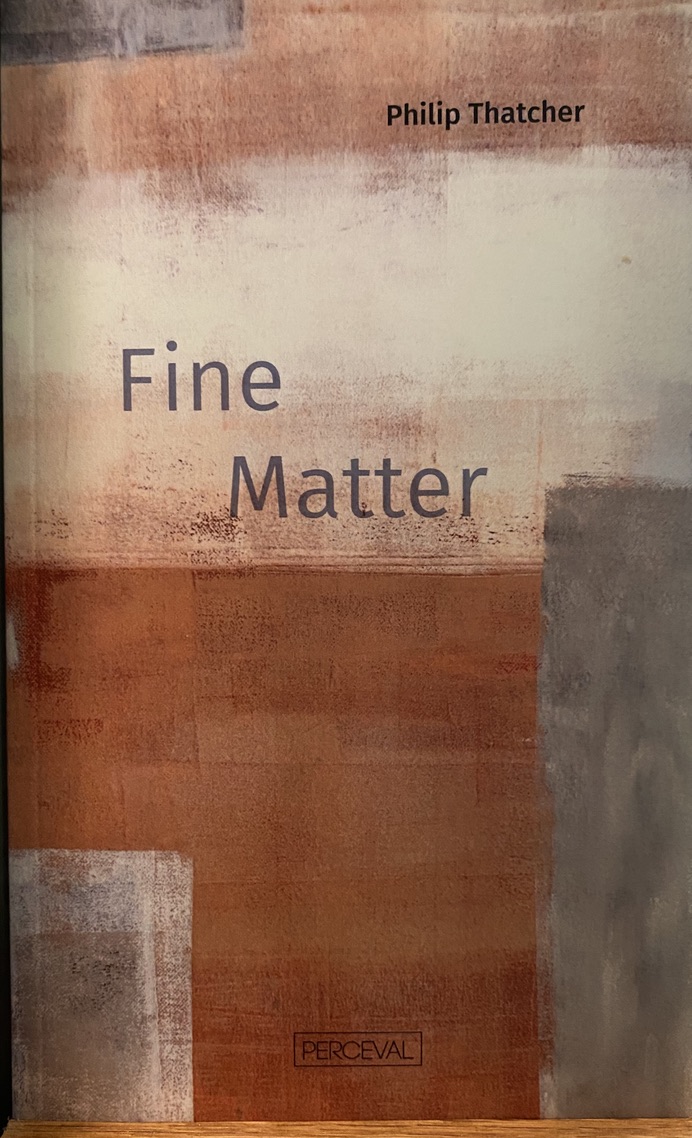 A Review of Philip Thatcher’s Fine Matter by Fred Dennehy

Fred’s review first appeared in the 2020 summer/fall issue of Being Human.

Owen Barfield, in characterizing the experience of poetry as “a felt change of consciousness,” goes on to pinpoint poetic pleasure to be “rarer and more transitory,’ something dependent upon the precise moment of change itself. If you pass a coil of wire across two magnetic poles, you will generate a current of electricity, but only during the moment of transition, when the coil is being brought into the lines of force or being taken away. At rest, the current disappears. It is the movement that is all important.

The poems in Philip Thatcher’s Fine Matter live and breathe in this movement. They take us through places alive with elemental forces that connect to what is stirring within us just beneath the surface, as well as swimming in the far cosmos. Thatcher’s landscapes are northern, of the Pacific Northwest, or Finland, or Russia, or the Canadian Shield, stretching from the sparse provinces of west and central Canada, down to the Great Lakes and up through Hudson Bay to the Arctic and as far east as Greenland. This is geography as old as the Precambrian and as new as the unexplored frontier. His lyrics delight in Native place names like Kaloloch, Naikoon, Nunavut, and in words from the Gitxsan people of the Skeena Watershed of British Columbia—words like adaawk (stream of story); amlax (Old Salmon); and ‘Nax’nihl (listen). Everywhere you encounter stones, and along with stones, snow, tundra, and the long snaking fogs of some of the world’s most demanding terrain. We feel the challenge of the emptiness, the openness, and the sheer possibility that arises when the familiar is left long behind us.

Thatcher’s verse can curve like a river, with rhythmic word recurrences unfolding through narratives of sentient surprise. He is also an accomplished novelist (The Raven Trilogy), and he speaks to us in pitch perfect tones, while refusing to allow his lines to say anything not truly heard. In three poems that follow one another in Fine Matter, “Dawn Reconnaissance,” “Holy Saturday,” and “About Creation,” Thatcher conjures an almost preternatural mood of expectancy, sounding along the edges of doubt, through Good Friday, Holy Saturday, and into Easter Sunday. When Easter arrives, it is not with the ringing of bells and the unqualified joy of Resurrection, but instead with keener questionings, finer longings:

Borne on the first sharp

can I speak only

Or can I start

to stammer water to wine

Transitions of all kinds are recurring themes. Here is a commencement address that I wish had been given to my own graduating class:

Listen between every line

only what you want

your need to despise

Know your hands are

they may fumble at

yet even the tip

of a finger can be

A word may mean

sounding its own truth

The very last poems in Fine Matter unfold almost entirely in a mood of passage. They include “Aging,” “This Late Winter Tree,”  Towards 81″ and the delicately graceful “To the End of the World,” reminiscent to the delicate sorrow of Antonio Machado.

There are diverse voices here: the intimate admonitions of a spiritual teacher in the selections from “Mask of the Sun,” the calm, accepting tones of age for what it knows will have to be; and the taut, controlled sketching of the wonders of frozen, barren vistas. Always there is resonance between outer landscape and inner experience.

Thatcher’s north can open to hidden events of the past, or to wordless inner discoveries; or to a sudden restoration of purpose and resolve. My own favorite is “An Arctic Fox Odyssey,” the story of the 3500 kilometers, two-and-a-half-month journey of a female fox from Norway to Nunavut, in the Canadian Arctic Circle. We see her losing her trackers as she finds at last an ice bridge to Canada. I suppose there may be better feminist poems, but it is difficult to recall them. Thatcher dedicates this poem to Joan Almon.

The fifty-seven poems of Fine Matter, spanning fifty years, are arranged into five collections: About Creation, Along the Edges, Turning the Earth, from Mask of the Sun, and A Brush of Light. Revelation is their medium. Don’t deny yourself the experience.

There is a wind in love with earth

a wind that will lift earth away

from earth and caress her into

a column of dust, swirl her

into a passion of sand

then with a last kiss

lay earth down upon earth

Such a wind knows its time

Such a wind will die away

without rage or lament

will want no final words

Philip’s book Fine Matter can be obtained from: