Here is a summary of the recent Section for Literary Arts & Humanities meeting of the local group in Fair Oaks, CA. This meeting occurred on May 2, 2020 via Zoom.

As noted in earlier emails, we have decided to continue these meetings on a weekly basis: every Saturday at 7 pm, for one hour. This was our fifth weekly meeting since our decision to increase the meeting schedule. I will send Zoom invitations and meeting materials on Fridays to the participants. We will continue with Novalis and the novel Heinrich von Ofterdingen, although we do like to take advantage of inspirations to digress or to meander. Next week, however, we intend to continue to discuss Chapter Five, the mining chapter.

As I’ve said, I have found that for me the best way to work with Novalis is to open myself to the imagination. To fix Novalis into neat categories and narrative formulations is a mistake, in my opinion. Novalis, as I noted previously from my personal experience, can bring to us inspirations and energy for creativity and self-renewal. His is optimistic and future oriented. He is creative.

His magical idealism invites us to become active creators – “poets” as he puts it – rather than passive spectators of a world from which we might otherwise rightly feel estranged.

As Novalis put it: “There is no evil in the world—and everything is again approaching the Golden Age.” Was he crazy?

We started our meeting with a verse – one of the fragments from the Teplitzer Fragmente, July 1798. We heard it first in German and then in English. 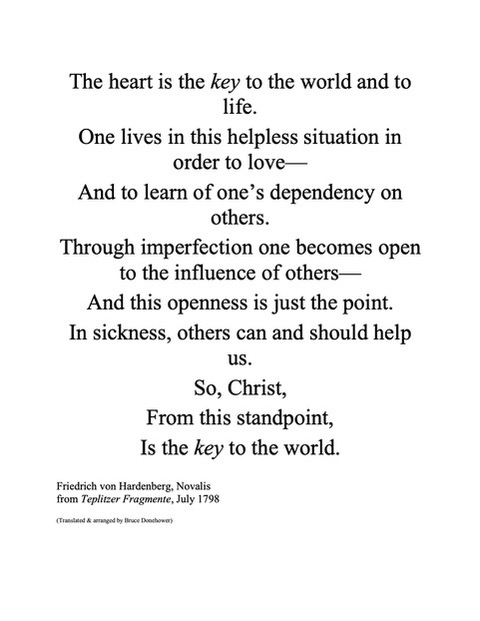 We then had a remembrance of one of our group members who recently crossed the threshold. I won’t summarize my remarks; they were spontaneous and for the moment and for the friends at the meeting.

Following this remembrance, we discussed mines and mining in the eighteenth century. We touched on Chapter Five in Heinrich von Ofterdingen. While Novalis presents mines and miners and mining in a very favorable light in Chapter Five, other romantics, such as Ludwig Tieck and E.T.A. Hoffmann, were far more suspicious. To be sure! We referenced Tieck’s story, “Der Runenberg” – in which the hero, named Christian by the way, gives us a good example of a failed or conflicted initiation, one might argue. It counterbalances the successful initiation to the underworld in Chapter Five of the Novalis novel. We discussed Saint Barbara and Saint Joseph of Arimathea – noting again how Blake made use of the legend of Joseph and the tin mines of Cornwall in his poem that begins “And did those feet in ancient time.” The intersections and overlaps between the Grail mythos, Parzival, and Novalis are noteworthy and exciting. Perhaps we can explore this terrain some more in future meetings? (Alice already got us started with her tour of the Wartburg recently.) Gayle made reference to the medieval guilds and noted that mining references are to be found in Freemasonic rituals. Once again, we considered Novalis’ penchant for Maerchen (“fairy tales”), and we pondered his use of these narrative elements in the novel. We paused briefly on a consideration of the feminine (Great Mother archetype, or “Isis”) – noting that Heinrich’s journey to Augsburg is a journey with the mother to the homeland of the mother.

“Where are we going then? Always towards home.” Thus runs a line of dialogue from the uncompleted Part 2 of the novel — a very suggestive key to the text. An open secret? We referenced Rudolf Steiner’s lecture of December 22, 1908, in which these words were spoken of Novalis:

“And so, we see how in the supremely gifted Novalis, feelings free of all denominational bias quicken to life at the portrayal of this holy Mystery which was enacted at the first Christmas and is repeated at every Christmastide. It is the Mystery of the ancient Initiates, represented by the Magi, bringing their offerings to the new Mystery. The Wise Men, who are bearers of the wisdom of times past, make their offerings to that which is to go forward into the future . . .”

As noted, we will continue with Chapter Five at our next meeting.

“Friends, the soil is poor. We must scatter abundant seed to assure even a middling harvest.” — Novalis

← Previous Fairy Tales Next The King of Metals →