The King of Metals 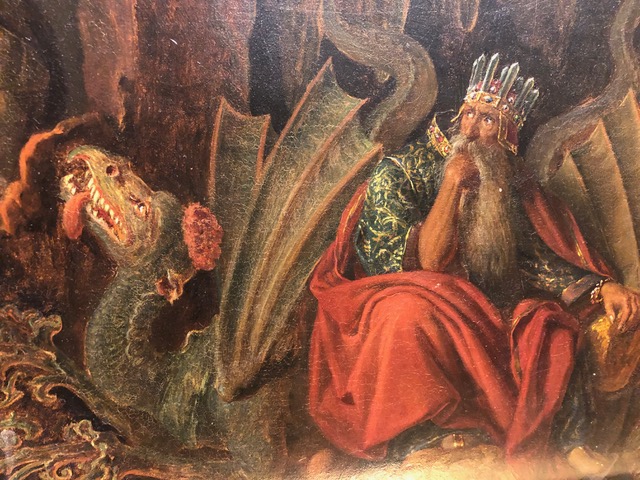 Here is a summary of the recent Section for Literary Arts & Humanities meeting of the local group in Fair Oaks, CA. This meeting occurred on May 9, 2020 via Zoom.

The picture displayed above is a detail from a larger work that hangs in the Crocker Art Museum in Sacramento. I don’t have the name of the 19th-century artist at hand, unfortunately. Our group has looked at this picture several times, and we referred to it again to help us live into the mood of Chapter Five in Heinrich von Ofterdingen.

Here sits the King of Metals underground with his dragon — and he casts an anxious glance toward the roof of his cave, for he hears the busy sounds of miners. The emergent sciences and technologies and social forms of the new industrial era encounter here the mythological realm of faery. A similar encounter occurs in the writings of Novalis. Is the King of Metals rightfully anxious? Does he face exile from a world soon to be “disenchanted?” Is “the time at hand” for a “new mythology,” as the romantics suggest?

Questions such as these confront us in Chapter Five. Alice gave a presentation that helped us better understand the complexities. She spoke of Goethe’s Rosicrucian Initiation, referencing a series of six lectures by Frank Teichmann that appeared in 2007, published by Verlag Freies Geistesleben (Goethe und die Rosenkreuzer). She spoke of the Harz and Brocken, and she reminded us of the serious illness that struck Goethe when Goethe was a young university student. Years later, she related, Goethe found himself living in Weimar, responsible for many state affairs but longing to return to poetry and wondering: “Is the path to poetry closed to me forever?” On a cold February, he decides to visit the Brocken in the Harz — desiring not just to climb the mountain but to descend into the caves that lie beneath.

The scene is one that could very well have found a place in Novalis’ novel. Like Heinrich, Goethe meets a willing guide, a forester who can lead him onto the heights and into the depths — and there, in the cold darkness of the earth and in the cold darkness of the winter — he experiences an inner light of insight and transformation. As Alice related, Goethe emerged from this experience at the Brocken with a renewed conviction of his life’s destiny path: “I am a poet!” So, too, Heinrich — when he descends into the caves of Chapter Five — when he encounters the mysterious hermit and the mysterious Book of Destiny which shows him his own once-and-future destiny as poet — in living pictures and in marvelous foreign script. Soon Heinrich will encounter the master poet Klingsohr, whom Novalis modeled on Goethe — and Klingsohr, like Goethe, will become the hierophant who leads young Heinrich to an understanding of the poet’s calling. Inner and outer worlds interweave — “I will become a poet and I shall study nature,” resolved Goethe after his experience at the Brocken, Alice related. Heinrich will travel a similar path — although the novel of his adventure was left incomplete.

Following this presentation by Alice, we discussed briefly Gotthilf Heinrich Schubert, whose books Views from the Night Side of Nature and The Symbolism of Dreams are interesting early attempts to find a methodology of research suitable for realms of experience that the enlightenment episteme excludes or marginalizes or ridicules. We discussed briefly Theodore Ziolkowski’s scholarship (Romanticism and Its Institutions), and we noted again two tales that complement Chapter Five in Heinrich von Ofterdingen: Tieck’s Der Runenberg and E.T.A.Hoffmann’s Die Bergwerke zu Falun.

I should add also that Alice’s reference to the Harz Mountain region inspired a lively discussion about trees — with Marion sharing childhood memories of the birch trees found on the Bismarck estate forest near Hamburg. They are indeed impressive! Can we imagine Thuringia, Saxony, and Harz forested with such magnificent ancient trees? Or, if we imagine ourselves in the time of Goethe and Novalis, how would an experience of the “dark” forest in middle Europe have opened our hearts to the exploration of caves and mines?

Here’s the complete picture from the Crocker in which the detail of the King of Metals appears. 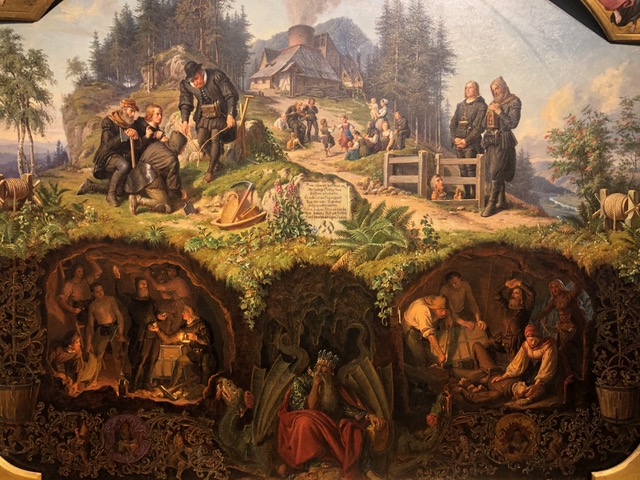 Our one hour evening passed very quickly. Unfortunately, we did not have adequate time for Patricia’s presentation. She had assembled artwork in response to the “call for blue” (paintings, that is to say) — artwork that can help us better comprehend the soul experience of the color blue — as an attempt to better comprehend the blue flower. But we tabled this presentation for two weeks. (Patricia is busy next week with a Zoom presentation/class on embryology.)

In the meantime, the “call for blue” received a few other responses: this one from Christiane Haid, who shared with us her artwork “Germ”.

All in all, given the constraints of the Zoom format, I think the meeting give-and-take on Saturday yesterday was quite lively and that we filled the time with more material than we could discuss. Prior to the crisis, our meetings lasted 2.5 hours, which allowed for more presentations and discussion and socializing (and snacks!) — but my recent experience with Zoom has led me to think that “less is more” for the time being. I know I’m pooped by the time we’re finished. I’m sure that as time goes by we will learn to ensoul new forums, but for now, one hour in Zoom feels right.

And lastly, on that same thread, I had in reserve some poems by Georg Trakl that I wanted to share with the group in case there was a gap in the evening. (Not!) These poems are from around 1913 — about the same time that Rudolf and Marie Steiner were presenting Novalis — and the poems might help us to better understand how Novalis was received in the early 20th century and how Marie and Rudolf Steiner’s reading of Novalis counterbalances prevailing reception at that time. I’ll try to briefly touch on this next week.

In the meantime, we will keep reading Heinrich von Ofterdingen, but we will continue to focus on Chapter Five. As a reminder: this Wednesday I will give the second part of a three-part Zoom presentation on Novalis to the Faust Branch. This is an offering of our local Section work.

Mother of the World/ Blue Sophia by Nicholas Roerich 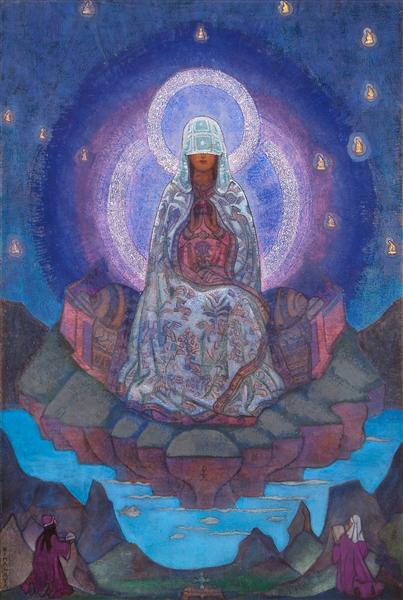 “The old man answered, “We did not expect to find here so friendly a host. We had been told of wild beasts and spectres, but we now find ourselves most agreeably deceived. If we have disturbed your devotions or deep meditations, pardon it to our curiosity.”
“Can any sight be more delightful,” said the unknown, “than the joyous and speaking countenance of man? Think not that I am a misanthrope, because you find me in this solitude. I have not shunned the world, but have only sought a retirement, where I could apply myself to my meditations undisturbed.” — Novalis, Heinrich von Ofterdingen, Chapter Five