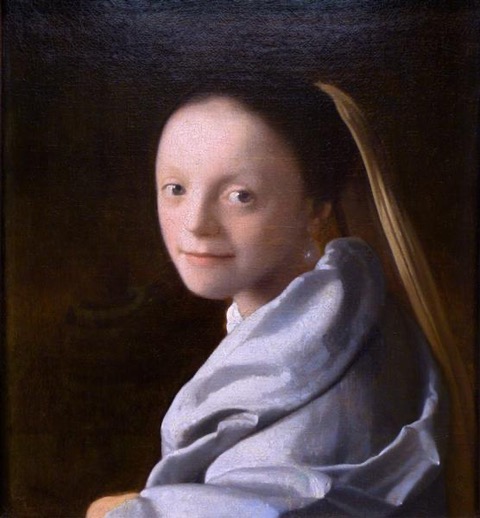 “Study of a young woman” by Johannes Vermeer

Last night on December 14, 2019 many of us gathered for another Section-inspired New Moon Salon. I was pleased to see that the group included friends new to our Section activities and friends and members who have been participating in our Fair Oaks meetings and salons for several years.

William Blake is especially interesting for our Section work. Blake, as you know, was a visual artist as well as a poet. His artwork is displayed in museums of first rank. Blake intended his visual art to complement his poetry – and in fact, he believed that the experience of his poetry was incomplete without his visual art. Some might suggest that Blake inaugurates for the English literary tradition an attempt to create a “new mythology” – that is to say, a mythology aligned with spiritual truth but arising from the freely creative imagination of the individual. The line from Blake extends to C.S. Lewis and J.R.R. Tolkien, for example. In this regard, Blake takes up a challenge that we hear in German early romanticism – in particular, in a text titled “The Earliest Program for a System of German Idealism,” in which the author calls explicitly for a new mythology. This anonymous fragment has been attributed to various persons, including Hegel, Hölderlin, and Schelling.

“First I will speak of an idea that, as far as I know, has not yet occurred to anyone—we must have a new mythology, but this mythology must serve ideas, it must become a mythology of reason.”

I hope we will have time to unpack this text at one of our future Section meetings or kitchen talks.

Our Salon yesterday consisted of two parts. During the first part, I presented 40 minutes of music for the classical guitar. This included three pieces by Bach. We then had a break for conversation and refreshments after which three of us performed original music that I composed for the poetry of Rilke and Blake.

The local Section group’s “Rilke Project” has been ongoing in our salons since September 2018, when Marion, Nancy, and I premiered original music with eurythmy for two of the Sonnets to Orpheus. Marion and I repeated this performance in Boston last summer but without eurythmy. Last night Marion and I presented my three new musical settings for three of the Rilke Sonnets. This original composition premiered in October in southern California, at another salon. For those who were unable to attend last night’s salon, here is a link to the Rilke Project.

After Rilke, Patricia joined me to perform original music for two poems by William Blake: “The Divine Image” and “The Tyger.” I wrote this music especially for Patricia, and she sang it marvelously! I look forward to more collaborations with Patricia and other members and friends of the Section.

(I’m sorry that I can’t share any video or audio from last night’s salon. It was just too much to manage! But Patricia and I plan to make a recording of the Blake music as soon as we can.)

Finally, a gift. When Marion and I were down in southern California for the Rilke salon, we had an opportunity to record the Adagio movement from Beethoven’s “Moonlight Sonata.” In this recording, I play the Adagio while Marion recites the poem “And den Mond” by Goethe. This project also arises directly from our Section work in Fair Oaks. I know that this poem by Goethe carries very special meaning for many of our dear friends in the Section, and I offer it as a Christmas gift of fellowship in the spirit of the season of Peace and Good Will. May the reader flourish!

“An den Mond” by Goethe

“Where Mercy, Love, and Pity dwell
There God is dwelling too.”
— William Blake, “The Divine Image”