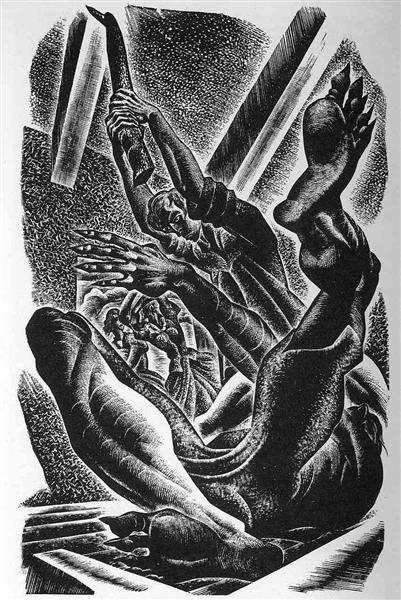 At our meeting on July 13, 2019 we entered more deeply into our study of British Romanticism, following a thread that leads to our theme: “Mary Shelley’s Frankenstein: Humanism, Transhumanism, and the Challenge of Artificial Intelligence.” (Please see my recently emailed report on the June 30 Section meeting for more details and information about this theme.)

We began the evening with a discussion of Section events. We discussed the recent resignation of Marguerite Miller from the Section collegium, and we discussed Christiane Haid’s planned 2020 visit. Unfortunately, I don’t have any more details to share at this time, but I will keep everyone informed as events shape themselves.

We then discussed Frankenstein. Our conversation centered on the characters of the Creature and Victor Frankenstein. In recent years, Mary Shelley’s novel has attained a solid position in the canon of the academy. Its appearance in graduate seminars, introductory courses, and full-length courses devoted to this text alone may surprise some readers – but I think we have begun to understand the book’s appeal and the necessity for its inclusion. Mary Shelley and her mother Mary Wollstonecraft Godwin suffered from the gender bias all too common in past decades; Mary Shelley in particular received very harsh and unfair disparagement. Her novel Frankenstein was dismissed as a pot boiler suitable for Hollywood treatment but not appropriate for the “high-minded” university classroom. All this has changed – and one reason is the currency and prescience of the book’s themes.

What does it mean to be human?

What are the moral limits of human striving and intelligence? What does it mean to create a “second-order” nature and/or “artificial” life? What does it mean to create an artificial “human” being? What is the role of language in the human moral universe, and to what extent is our humanity dependent on language? What happens if the artificial human speaks – or worse! – uses language eloquently? Even worse!!: what happens if the artificial “human” learns to use language better than less-educated carbon-based life forms! What happens if we love IT – or IT loves us? What is love? What is the Double – and to what extent does “evil” direct our “progress”? Who am “I”. Why did Mary Shelley subtitle her book “The Modern Prometheus,” and how does the mystery of Prometheus shape our culture and perhaps our ultimate spiritual destiny?

These are only a few of the themes that arise from the book. Accordingly, our journey with this late romantic masterpiece has only begun. Already, however, we can see inspiring connections to other texts that we have studied in entirety over our several years together. Texts such as: Faust, Parts One and Two, The Sorrows of Young Werther, The Tempest, The Winter’s Tale, The Rime of the Ancient Mariner, and others. (Werther, by the way, may seem a surprising member of this list – not so when we read in Frankenstein that the Creature read Goethe’s book (in French!) and that Werther, along with Plutarch’s Lives and Milton’s Paradise Lost, seminally influenced the Creature’s spiritual development.

Anyway, lots of fun! We will go farther down the road of adventure at our next meetings. In the meantime, keep reading and re-reading Frankenstein (hey, and watch the movies!) and any other texts in the anthology. For my part, I’ll try to give some attention to Manfred and Prometheus Unbound.

Learn from me, if not by my precepts, at least by my example, how dangerous is the acquirement of knowledge, and how much happier that man is who believes his native town to be his world, than he who aspires to become greater than his nature will allow.
— Mary Shelley, Frankenstein