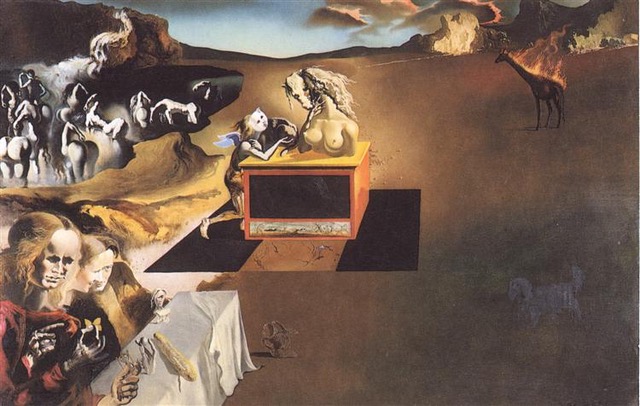 “Invention of the Monsters” by Salvador Dali

We used most of the time during our meeting on September 14, 2019 in discussion of Mary Shelley’s Frankenstein. Nancy presented Mary Shelley’s biography – and this allowed us to discuss Mary Shelley’s parents Mary Wollstonecraft and William Godwin. Nancy’s presentation allowed us to consider Mary Shelley’s novel from the standpoint of biography. It also brought into discussion Godwin’s concern for ethical individualism – that is to say, Godwin’s late-enlightenment belief that society could reform itself on the basis of free individuals who had developed a spiritual capacity to act truthfully out of clear moral intuitions. We noted the attraction that this philosophy had for Percy Shelley, and we noted as well the failures of this philosophy – in particular Godwin’s personal failure to temper high idealism with compassion and/or common sense and his rejection of his infant daughter Mary at a very young age. Nancy also noted another example of failure to temper high idealism with human sympathy by referring to Godwin’s memoir of his wife Mary Wollstonecraft, a book that sank Mary Wollstonecraft’s reputation and consigned her brilliant literary works to ignominy and ridicule for many decades – until the Age of Light, actually. To read Mary Shelley’s Frankenstein as a critique of Godwin (and thereby, to borrow from Adorno: as a critique of the enlightenment ethos) is fascinating. Such a reading is actually in alignment with Mary Shelley’s critique of what she witnessed as a participant to late romanticism. To her credit, however, Mary Shelley persevered; as Nancy pointed out, Mary Shelley was largely the one responsible for salvaging the reputation of her husband, Percy Shelley – this by dint of her devoted efforts to prepare his manuscripts for publication. If there is an example of ethical individualism in the sense that Godwin hoped to foster, it is ironically Mary Shelley’s example, one might argue. 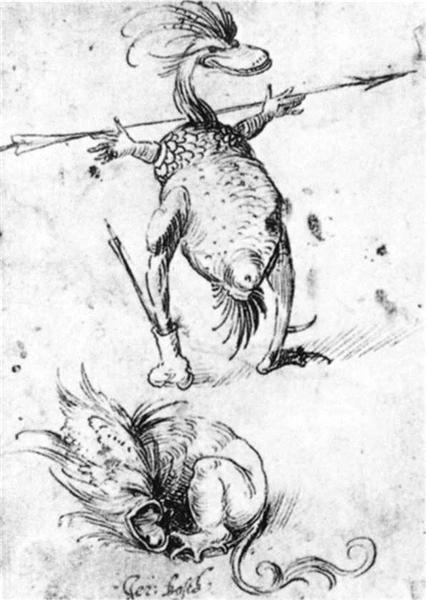 Monsters, Artificial Intelligence, & the Being Human

In addition to reviewing the biographies of Mary Shelley, Mary Wollstonecraft, and William Godwin, we completed our discussion of Frankenstein. To help tie together the two aspects of our evening (Section developments / literary discussion of Frankenstein) I noted that the very first research theme that one encounters listed on the website of the Sektion für Schöne Wissenschaften is “Humanization of Man [the human being] Through Literature.” (Scroll through the splash screen to find it.) Here is the link to the website:

For this reason, I again directed attention to those sections of Frankenstein in which the Creature, an artificial human, “humanizes itself” through the reading of literature: in particular Goethe, Plutarch, and Milton. How many of us, for example, have read Milton’s Paradise Lost from cover to cover, or Plutarch’s Lives of the Noble Grecians and Romans? These are important books of instruction for the Creature – who read them in French! — along with The Sorrows of Young Werther. And this, after he taught himself the French language entirely on his own at about the age of two by observing (through a peephole) strangers speak the language! But, not only is the Creature a literate genius, he is a highly gifted rhetorician whose words and the way in which he uses language are persuasive and eloquent. He speaks in paragraphs, and his sentences are finely crafted. His facility with language may, in fact, be one of his most disturbing and “monstrous” characteristics. Victor Frankenstein, his creator, thinks so. While the Creature is possessed of superhuman strength and has an appearance that “curdles milk” – if you pardon the cliché – what equally horrifies people, apparently, is his literate intelligence.

I read from the novel those sections in which the Creature achieves what might be called “enlightenment insight.” That is to say: he becomes a free, self-conscious, morally intuitive (human?) being. He confesses to his creator Victor Frankenstein that he encounters many challenges as a consequence of this “enlightenment” – he confesses that as a free individual whose moral intuitions prompt him to act compassionately toward fellow creatures, he finds it impossible to act truthfully because supra-personal social forces of human greed, fear, and ignorance condemn him to play the role of “monster.” (Related to this discussion: a brief reference to the movie Frankenstein in which the Creature is humanized in a different way. The Creature in the movie is certainly not literate; rather, he is an innocent or a waif, somewhat in the manner of a toddler or perhaps a developmentally disabled adult who simply cannot navigate the evils of “normal” human society – human cruelties, hypocrisies, lies, and contradictions.) 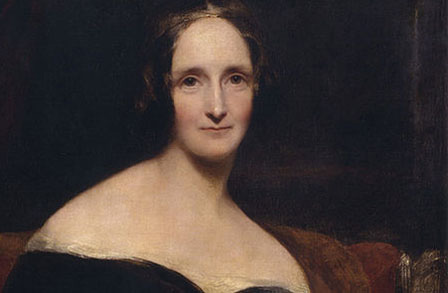 The first text, The Tempest, contains a character whom we all know from our Shakespeare days: Caliban. Another “monster.” What makes Caliban monstrous? Is he indeed monstrous? What does it mean to call the foreign Other a “monster?” What does it mean to reject the foreign Other as monstrous or unfit for cultivated human society? What does it mean if we recognize features in ourselves that we reject, or fear, or that we find abhorrent: features that cause us to have feelings of shame, self-loathing, or horror upon beholding – in other words, soul qualities such as we confront when we are thrust unprepared and all of a sudden across a psychological or spiritual threshold, as indeed happened to Shelley’s Creature?

The second text is The Metamorphosis by Franz Kafka, an author that Doug Miller recommended to us when he visited in May, 2019. If you have time, I encourage you to skim Kafka’s text – in particular the figuration of Gregor Samsa as “Ungeziefer.” Recall that Doug reminded us that Gregor is not specifically a beetle or a cockroach. “Ungeziefer” has connotations of something unclean, unfit, unmentionable. (“Als Gregor Samsa eines Morgens aus unruhigen Träumen erwachte, fand er sich in seinem Bett zu einem ungeheueren Ungeziefer verwandelt.”) Gregor is outside our known and reassuring classifications. He has become monstrous – and he self-witnesses as such – much like Caliban and Shelley’s Creature; while at the same time Gregor remains (like Caliban and Shelley’s Creature) disturbingly literate, self-reflective, and one might very well argue, sympathetic. But perhaps in a dangerous or transgressive way? The knee-jerk judgement of almost everyone who beholds Caliban or Gregor or Shelley’s Creature is: “Evil!” And they run away in horror and disgust, or they try to kill it, or reform it or preach to it. But no one pays attention to “its” language. And in this respect, the thing condemned as “monster” remains invisible, as well as unheard. Is this a weakness of our perceiving or is this inevitable? Why has Shelley crafted her text as multiple framed narratives? Can persons witness truthfully? What would such witnessing signify from a spiritual scientific standpoint — that is to say, from the spiritually objective standpoint of initiation? 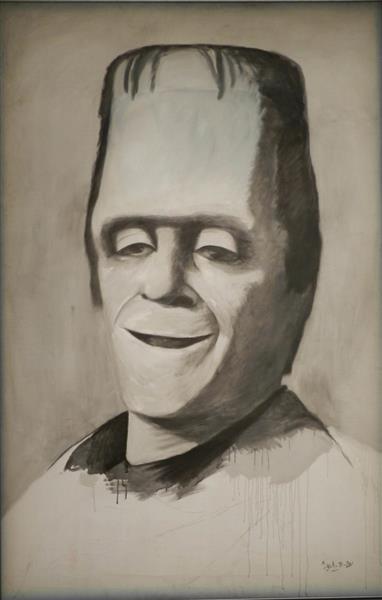 I should also mention that a fascinating author from the German-speaking world made a brief appearance yesterday at the meeting. Marion presented E.T.A. Hoffmann. Hoffmann is outside the shrubbery of our British romantic garden, but he really should be coaxed out and invited to the garden party— most especially if we are going to take up the theme of transhumanism, AI, and the challenge of the so-called artificially human. Marion presented The Sandman, but there was not really enough time to unpack its themes and meanings. If you can get a copy, however, I recommend that you read Hoffmann to gain a more nuanced perspective on Mary Shelley’s novel – and just to have a whopping good time.

Well, we could go quite far with this theme, but for now, let’s move on! “Cheerio, Mary Shelley – au revoir, Monsieur le Monstre!”

At the “kitchen talk” on September 28, I will lecture on the topic of late romanticism – Percy Shelley, Keats, Byron.