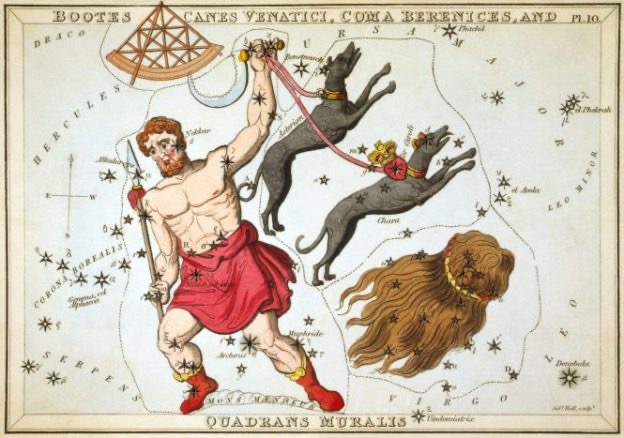 Here is a summary of the recent weekly Section for Literary Arts & Humanities meeting of the local group in Fair Oaks, CA. This meeting occurred on June 27, 2020 via Zoom. In this meeting, we continued our exploration of Novalis and the novel Heinrich von Ofterdingen.

Squint closely at the left knee of the star hero above, and you will see the star Arcturus — a name and character that figures prominently in Klingsohr’s Fairy Tale in chapter nine of Heinrich von Ofterdingen by Novalis.

Let’s begin with stars. Hardenberg was in a hurry. From the moment in 1798 that he named himself “Novalis” in his first publication titled Pollen (Blüthenstaub) to the writing of his incomplete novel Heinrich von Ofterdingen in the months before he died — we have only three years. “We search everywhere for the unconditional but find only things.” (In German: “Wir suchen überall das Unbedingte und finden immer nur Dinge.”) He did not have time or interest to write the sort of novel of manners that we find in other national literatures. When Klingsohr explains to Heinrich that Märchen (aka fairy tales) are the highest form of poetic art, he is warning Heinrich: don’t waste your time. When Klingsohr then presents his exemplary Märchen — his masterpiece that is meant to show Heinrich how to proceed as a poet — Klingsohr tells a story of the stars.

The Märchen in chapter nine can be read as a star myth — that is to say: it tells a tale of goddesses and gods, heroes and heroines, who are star born and ever-present — whose stories are eternally transpiring for the seer/poet who can read the starry script of that once and future world that is always now. “When did it happen, when did it not happen . . . “ Words like these begin a “fairy tale” when we speak to young children. Novalis speaks to us in a similar way — he turns our attention to the “unborn,” to the “unconditional” — impossible though it may be to put this into words.

But that is why we have art, poetry, literature — as the romantics see it. As with Hamlet and other great works of literature: when we open our eyes to spirit, we read the script of stars — the eternal story that never changes, always fascinates, is ever new. Novalis (through the character of Klingsohr) points us to this drama in the stars — the stars that once spoke to humankind, that are silent now — unless we can find through the power of imagination and art the capacity to speak to them, says Novalis. 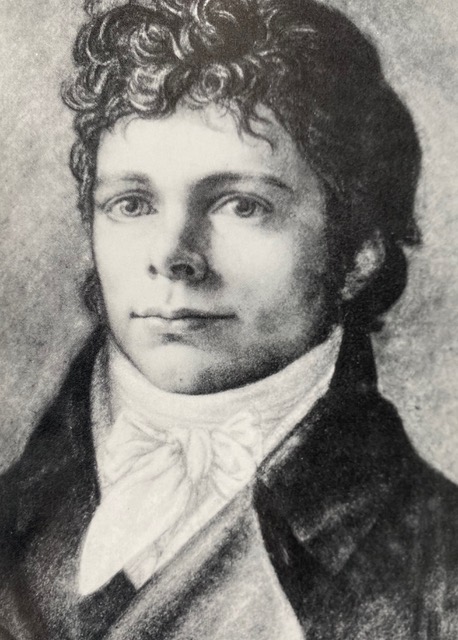 The second topic we considered was F.W.J. Schelling, a friend, contemporary, and colleague of Hardenberg. In particular, we referenced a text that Schelling wrote at age 19 (1795) while a student at the Protestant Seminary in Tubingen: Of the I as the Principle of Philosophy or The Unconditional in Human Knowledge. (In German: Vom Ich as Prinzip der Philosophie oder Über das Unbedingte im menschlichen Wissen. Note the joke/pun. . . when you read this title in German and then read the first fragment by Novalis in Pollen, mentioned above.) Schelling, along with Fichte, was one of the philosophers who greatly facilitated Hardenberg’s breakthrough to Novalis. Hardenberg struggled with such philosophies (one might imagine in another context a meditant sitting with these texts as one sits with koans) during the time of his engagement to Sophie and during the time of mourning that he chronicled in the Journal of 1797. At the time of mourning, this struggle led directly to a spiritual breakthrough — aka an enlightenment experience, if one prefers — on May 29, 1797 (Sophie died in March, 1797) when Hardenberg wrote this entry in his journal: “I had the joy of finding the true concept of the Fichtean I.”

One can dispute the meaning of this journal entry. Interesting, however: Rudolf Steiner had a similar significant experience early in his life while reading the philosophy of Schelling. Christoph Lindenberg discusses this experience in his biography, on page 84 of Volume 1 of the German edition. From a letter by Steiner quoted there.

“Schelling says: Innate in all of us is a secret, wonderful capacity to withdraw from the changing fortunes of time into our inmost self that is unrobed of all that is attached to us from without; and there, in an immutable form, to gaze upon the eternal in us. I believed and still believe now that I have discovered that inmost capacity very clearly within me – having long had an intimation of it. The whole of Idealistic philosophy now stands before me in a substantially modified form: what is a sleepless night compared to such a discovery!”

Prominent among the works of Schelling that Steiner struggled with during that sleepless night that led to this insight: Of the I as the Principle of Philosophy or The Unconditional in Human Knowledge.

To simplify matters for this summary: Schelling in this short essay points us to an experience of the unborn. “Unborn” is a word that we find in many traditions, Zen Buddhism, for example, where it is the main teaching of Master Bankei (1622-1693). Other ways to express this inexpressible experience of the “unconditional” (“when did it happen? when did it not happen?”): the clear light of awareness, Rigpa, Alaya, intellectual intuition, Buddha mind, etc.

The point for Novalis and the romantics is this: the spiritual world is not a what, it is a how. Most of the novel Heinrich von Ofterdingen is an attempt to show us How. Klingsohr’s gift to Heinrich is a demonstration, a doing — it is not a thing. We find only “Things” — if we don’t know How. If we don’t know how, we are like the Scribe in Klingsohr’s tale, very busy but lost in a petrified forest of scholarly footnotes.

This discussion led us directly to a discussion of conscience — as Novalis presents the term in the final incomplete part of Heinrich von Ofterdingen, when Heinrich meets Sylvester. This also led us to a consideration of the role of fathers in the novel. The novel starts with a conversation with Heinrich’s father and ends with a conversation about Heinrich’s father and Sylvester’s father. In between, Heinrich meets his spiritual/intellectual father or Doktorvater, Klingsohr, and he marries Klingsohr’s daughter, Mathilda

Next week we will look at previous incarnations of the eternal individuality (entelechy, to use the Goethean term) that Rudolf Steiner identified to have taken human birth as Friedrich von Hardenberg in the late eighteenth century. And then we will cross-reference some themes and motifs in HvO that are dominant in the Grail literature — especially in the work of Wolfram von Eschenbach.

That will bring us nearly to the end of the novel — sometime in July, I expect. At that point, I think we will go on a search for the veiled Virgin — that is to say: we are going to read The Apprentices of Sais, it appears.

[Fable] ascended quickly and soon came to an aperture, which opened into the apartment of Arcturus.
The king sat surrounded by his counselors when Fable appeared. The Northern Crown adorned his head. He held the lily in his left hand, the balance in his right. The eagle and the lion sat at his feet.
“Monarch,” said Fable, bending reverently before him, “Hail to thine eternal throne! Joyful news for thy wounded heart! An early return of wisdom! Awakening to eternal peace! Rest to the restless love! Glorification of the heart! Life to antiquity and form to the future!”
— Novalis, Klingsohr’s Tale

“Conscience is the innate mediator of every man. It takes the place of God upon earth and is therefore to many the highest and the final.”
— Novalis, Heinrich von Ofterdingen